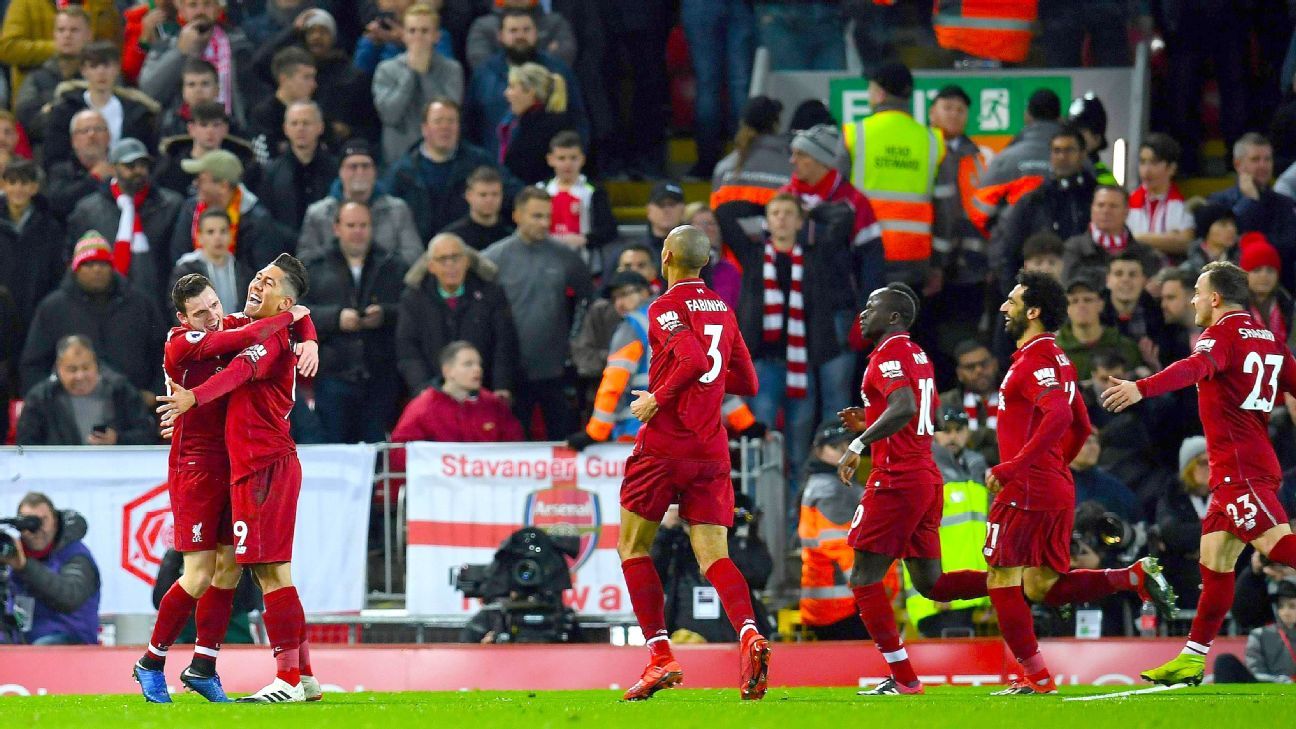 LIVERPOOL, England — Three thoughts on Liverpool’s 5-1 win vs. Arsenal in the Premier League.

Liverpool moved nine points clear at the top of the Premier League, and 10 clear of champions Manchester City, with a destruction of Arsenal at Anfield that saw with Roberto Firmino end a recent barren run with a hat trick.

Although City can reduce the deficit to seven points with a win at Southampton on Sunday, the manner of Liverpool’s victory will have hammered out an ominous warning to the chasing pack.

Jurgen Klopp’s team, which is still unbeaten in the league this season, face City at the Etihad Stadium next Thursday in a game that is crucial to the champions’ hopes of retaining their title. On current form, though, Liverpool are going to take some stopping.

Arsenal gave their hosts a scare by taking the lead — the first away team to do so at Anfield since last December — when Ainsley Maitland-Niles converted Alex Iwobi’s cross at the far post.

However, from that point on, Liverpool’s relentless attacking proved too much, with Firmino (2), Sadio Mane and Mohamed Salah putting them 4-1 in front by half-time. Firmino completed his treble from the penalty spot on 65 minutes to complete Arsenal’s misery.

But while Unai Emery’s team were bad, Liverpool were outstanding, and no team could have lived with them on this occasion. If they win at City, a first league title since 1990 will surely be on the cards.

Firmino is the highest-scoring Brazilian in Premier League history after eclipsing former Liverpool teammate Philippe Coutinho with his 41st, 42nd and 43rd goals for the club.

The 27-year-old is a crucial member of Jurgen Klopp’s team, but his contribution is often overshadowed by the goals of Salah or Mane. Before this game, Firmino had scored just twice in the league since mid-September, yet there was never a suggestion of his place being under threat.

And for any of the lingering doubters, he showed why he is so important to Liverpool with his three goals. The first was a poacher’s strike after a defensive mix-up, the second was a stunning solo effort after Lucas Torreira lost possession and the third was a penalty — Salah charitably handed the ball over — in front of The Kop.

Beyond his goals, though, it is Firmino’s strength and work rate that make him so valuable. He can play as a central striker or off the more advanced Salah and still make a difference, while his vision enables him to pick a pass or pull off the audacious.

This Liverpool squad has many key components, but none are more important than Firmino.

There have been positives at Arsenal under Unai Emery, but Arsene Wenger’s replacement continues to be plagued by the defensive problems that haunted his predecessor’s final seasons as manager.

Wenger’s last visit to Anfield, in August 2017, ended in a 4-0 hammering on one of the worst days of his 22 years in charge. On that occasion, Arsenal’s meltdown at the back was key to the heavy defeat, and it was the same story this time.

Emery’s players were unable to hold the lead they claimed after just 11 minutes through Maitland-Niles’ far-post finish. Liverpool’s equaliser came within three minutes as the result of a defensive mix-up and the hosts’ second — two minutes after that — was set up when Torreira carelessly lost the ball in midfield.

Arsenal’s woes continued: Mane was left virtually unmarked to score the third from close range, then a clumsy trip by Sokratis Papastathopoulos on Mohamed Salah led to the penalty from which the Egyptian forward scored to make it 4-1 before half-time. Sead Kolasinac conceded another penalty in the second period with a needless push on Dejan Lovren.

Emery’s biggest problem is the defensive personnel at his disposal. The defenders he inherited are simply not good enough, too old, or both, while summer signings Sokratis and Stephan Lichtsteiner are experienced, but not quick enough. Lichtsteiner, for example, turns 35 in January and looked every one of his years during a torrid outing at Anfield.

Rebuilding a completely new defence will take time and money, and Emery needs both. A January addition is a must because Arsenal have conceded more goals — 30 — after 20 games than ever before in the Premier League.