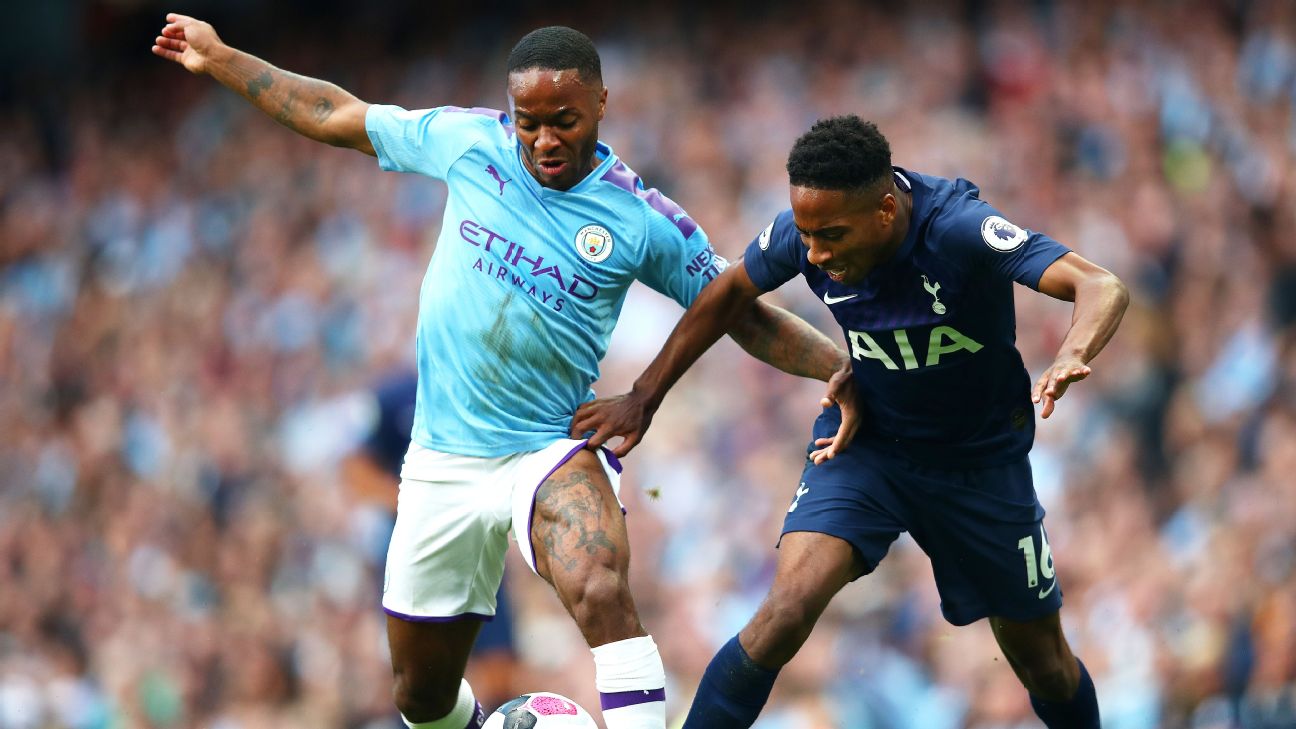 MANCHESTER, England — Manchester City were denied another late goal against Tottenham by the VAR as Pep Guardiola’s side were held to a 2-2 draw at the Etihad Stadium. Gabriel Jesus thought he had scored a stoppage time winner but saw the goal chalked off after the video assistant spotted Aymeric Laporte‘s handball in the build-up.

It was a similar story in the Champions League tie between the two teams last season when Raheem Sterling‘s late clincher was also ruled out by the television ref. It was Sterling who put City ahead this time with a back post header that beat Hugo Lloris. Erik Lamela equalised before Sergio Aguero‘s clever finish put the hosts 2-1 up at half-time.

Substitute Lucas Moura scored a second Tottenham equaliser from Lamela’s corner just after half time before the late drama denied City a winner and ended their run of 15 consecutive Premier League wins.

Kevin De Bruyne only made 11 Premier League starts last season and City were still able to hold off a Liverpool team who racked up more than 90 points. But if anyone needed proof that Guardiola’s team are better with the Belgian in it, he delivered it here. You won’t see a better cross that the one he planted on Sterling’s head for the first goal. His assist for Aguero was also pinpoint — whipping the ball into the near post from the right. He should have had a hat-trick of assists before half-time and the only thing missing after his drilled pass into the penalty area just before half time was Ilkay Gundogan‘s finish.

Guardiola will be disappointed with Tottenham’s goals, both of which came out of nothing. Lamela found himself in acres of space on the edge of the area to make it 1-1 and the second equaliser after half time came from a corner that should have been cleared. City defended well for the majority of the game but two lapses cost two goals and two points.

Manager rating out of 10

Pep Guardiola, 6 — There aren’t many many managers who would make four changes after a 5-0 away win but Guardiola isn’t most managers. Back came Gundogan, Aguero, Bernando Silva and Nicolas Otamendi while Jones Stones, a starter against West Ham, was left in the stands. It looked odd to replace Aguero with the score at 2-2 but the decision to throw on Jesus almost paid off when the Brazilian found the net in injury time only for the goal to be ruled out.

GK Ederson, 6 — Hit one sublime pass the length of the pitch to Oleksandr Zinchenko. Might feel he could have done better with Lamela’s goal.

DF Oleksandr Zinchenko, 7 — Didn’t do much wrong at left-back. Covered a lot of ground and was left struggling with cramp by the end of the 90 minutes.

DF Aymeric Laporte, 6 — Good on the ball but should have got out quicker to Lamela when the Argentinian equalised for Spurs from the edge of the box.

DF Nicolas Otamendi, 7 — Left on the bench last week and didn’t waste his chance against Tottenham. Helped keep Harry Kane quiet and the Spurs striker barely had a kick.

MF Rodri, 7 — Careful and composed in front of the back four. Saw a stinging effort saved by Lloris before being sacrificed for David Silva as City chased a winner.

MF Ilkay Gundogan, 6 — Brought back in at the expense of David Silva. Should have made it 3-1 before half-time when De Bruyne cut the ball back across the box.

FW Bernando Silva, 7 — Back in the team after his surprise omission against West Ham. Deserves a lot of credit for creating spaces on the right for De Bruyne to set up both of City’s first half goals.

FW Raheem Sterling, 7 — After scoring a hat-trick against West Ham, his stooping header at the back post put City a goal up.

FW Sergio Aguero, 7 — The Argentinian had not scored in his previous seven league games against Tottenham but he ended the run with a clever near post finish from De Bruyne’s cross.